We work hard to care for your investment.

Dogs, and other animals, have been aiding and working with humans for centuries, in everything from farming to hunting to protection and more. Service and emotional support animals all fulfill important roles in their aid to humans, but the terms are not interchangeable. It can be confusing trying to differentiate the exact role they play and the legal rights offered, especially when you’re looking to rent, which is why we are here to help. What Do Service Animals Do? As defined by the Americans with Disabilities Act (ADA), service animals are individually trained to perform specific tasks and to work with people with disabilities. According to the ADA, disabilities can be “physical, sensory, psychiatric, intellectual, or other mental disability.” The work of the service animal must be directly related to the handler’s disability. These are just some of the things a service animal can do:

What Rights Do Service Animals Have?

What Do Emotional Support Animals (ESAs) Do?

Emotional support animals are not considered service animals under the ADA. They may be trained for a specific owner, but they are not trained for specific tasks or duties to aid a person with a disability, and this is the main difference between ESAs and service animals. This doesn’t minimize the support these animals provide for people with a psychological disorder. They’re considered companion animals and ease anxiety, depression, some phobias, and loneliness.  In order to be considered an emotional support animal, it must be prescribed by a mental health professional for a patient with a diagnosed psychological or emotional disorder, such as anxiety disorder, major depression, or panic attacks.

What Rights Do Emotional Support Animals Have?

Unlike service animals, ESAs have only limited legal rights and those typically require a letter of diagnosis from the owner’s doctor or psychiatrist. While they don’t have unlimited access to public spaces, the Fair Housing Act mandates “reasonable accommodations” for emotional support animals even in buildings that don’t allow pets. The Air Carrier Access Act requires airlines to allow ESAs on flights, but travelers must have a letter from a doctor or licensed therapist. There may be additional requirements as well. Because so many people abuse the concept of an emotional support animal, including the traveler who tried to bring an “emotional support peacock” on board a United Airlines flight, airlines are tightening restrictions on emotional support animals. We can expect other commercial and public spaces to follow. If you’re still confused, here is a simple breakdown from ESA Doctors breaking down the general differences. 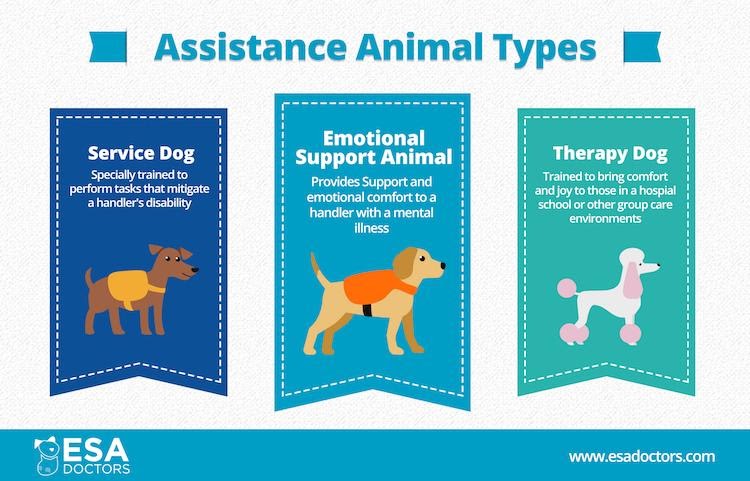 ** Florida Landlord/Tenant Law does not differentiate between ESA and Service Animals, so the rights of a landlord are limited to:

Why You Should Hire a Management Company, if You are Lo...

Are You Ready For The SnowBirds?

What should your Property Management Company be doing f...